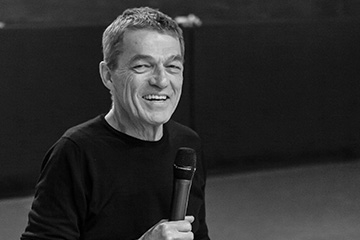 Jens Thomas Arnfred (born 1947) is the co-founder of Tegnestuen Vandkunsten, one of Denmarks most acclaimed architectural offices, established in 1971 as a group of rebellious young architects who wished to change people’s way of living.

During the 1970s and 1980s, the office won a great number of competitions for large social housing projects all over Denmark, Norway, and Sweden. With a pragmatic approach to everyday building materials, but a highly aesthetic sensitivity, Vandkunsten has managed to create thousands of dwellings for average people and families, sharing social, aesthetic and tectonic qualities that are rare in today’s architecture.

Being the teachers of Bjarke Ingels and many other distinguished young architects, Jens Thomas Arnfred and his fellow partners from Tegnestuen Vandkunsten have marked a whole generation with a pragmatic attitude towards architectural conception, yet with a high degree of social qualities and unorthodox, sometimes radical, architectural solutions.

Settlements like Tinggården, Hesselbo, Hedelyngen, Jystrup Savværk, Trudeslund, Fuglsangpark, Dianas Have, Søhuse, all situated on Zealand, and Hestra Parkstad, Tre Guder and Laröd (Sweden) and Sandtunet (Norway) have all become new classics, with qualities of habitation far beyond the majority of today’s mainstream architecture, yet still to be discovered and investigated.